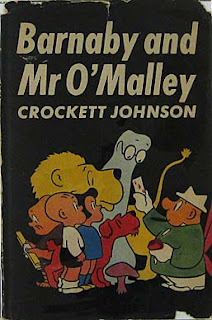 Barnaby was primarily a daily comic strip, created by Crockett Johnson (who also created the extremely famous children's book, Harold and The Purple Crayon). Barnaby ran from 1942 till approximately 1946, when Johnson turned the strip over to other artists.

The strip revolved around an unassuming little boy named Barnaby Baxter and his fairy godfather, Mr. O’Malley. Long before Bart Simpson coined "Don't have a cow," Mr. O'Malley had his own catch phrase, in the form of “Cushlamochree!” (which is hard to pronounce but a lot of fun to see when printed in a comic strip). Mr. O'Malley was essentially a friendly version of W.C. Fields (with fairy wings), and was a master of self-delusion. Charmingly, Mr. O'Malley always thought he had everything under control, but in fact he only made situations more complicated and messy. And it was often out of that personality trait that the conflicts (and comedy) grew.

Additional characters included Barnaby’s parents who never seemed to be able to see Mr. O’Malley, a fact that was always nicely played for is comic potential, and which leaves me wondering what influence this might have had on Bill Watterson when he developed his world for Calvin and Hobbes. And there was Gus The Ghost, who was very timid and easily scared. He also wore glasses, and fancied himself a writer (yes, a ghost writer).

As you might assume from a strip with a ghost character, the stories were often spooky, autumnal, and a bit mysterious. But they were gently so. Story lines would run for several strips, and involved surprisingly engaging plots of criminal intrigue, mysterious goings-on, strange dark figures who lurked in the shadows… all surrounded by slyly subtle humor, richly layered characters, honest tenderness… and silence.

Aren’t all comic strips silent? Of course, but Barnaby in particular. It might have been due to the strip's dialogue-heavy quality, which made it feel like a written story that just happened to have pictures. Perhaps it was the super-tight, conservative visual style Johnson employed, in which there was little movement perceived between panels. It might have been both facets, working together. But for a strip that contained so much silly, rambunctious adventure, it’s remarkable how it played out in such a quiet fashion. For me, there’s no other strip that I’ve come across that’s like Barnaby, in that it actually seems to define itself, at least in part, by quietness.

Typesetting as opposed to hand-done lettering was another distinctive facet of this strip. In his book Encyclopedia of Comic Art, Maurice Horn states that Johnson used typesetting because it would allow him to cram more words into his strip (I wonder if Johnson would entirely agree with that if he were alive today). The more words you use, the more story you can potentially tell. But comics are a visual language on a very primal level. When words appear in a strip, they possess a visual quality above and beyond the meaning derived from the actual words. In other words (no pun intended), Barnaby had a very distinctive look, a particular visual appeal, simply because the lettering looked different. The typesetting, in my opinion, lent the strip a formal quality which to my young eyes signified “grown up”. It meant this strip needed to be taken more seriously than others. This was no Garfield. This strip meant business.

But of course, the content was very silly indeed. And the resulting contrast between visual style and content (brought about through the use of typesetting) lent Barnaby a dynamic tension between its look and its content. This, much like its use of silence, helped mark the strip as unique.

Then there was the wonderfully balanced tone of the strip. It was so gentle, so perfectly innocent, that even when the characters were “hot on the trail” of what, for all they knew, might turn out to be a cold-blooded murderer, the reader never worried. The reader always knew that in the end it would turn out not to be a murderer, but an ice cream salesman who got lost in the woods. That’s a storyline I’ve just made up, by the way. But it’s fairly Barnaby-esque, trust me. It makes a lot of sense that in Encyclopedia of Comic Art, Horn suggests that some of Johnson’s biggest influences were the films of Frank Capra. There’s a gentle silliness shared by the films and the strip, a silliness that both entertains and maintains respect for the audience’s intelligence. 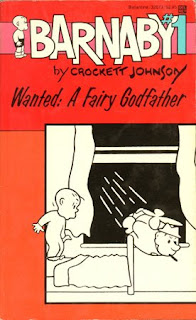 I’m OK that Barnaby isn’t around anymore as a current strip. I don’t think it could exist in this era, and there’s nothing inherently “wrong” about that fact. The world changes, and in the end it actually serves to make this strip more prized, more distinctive. But what I really do hope for is that someone will soon reprint the strips. The version I knew was published from Ballantine in the mid 1980s (pictured above, which I read when I was about twelve, for you math majors that want to know how old I am). These reprints are hard to come by, and are usually quite expensive. The time is ripe for someone to collect the original Barnaby strips and bring them into print again. And they (whomever these saints might be) must promote the collection appropriately, so that as many people as possible can be touched by this special little comic world.

In the meantime, what are Barnaby fans to do? We can start by praising the efforts of Philip Nel, who has built the go-to place online for Crockett Johnson info, and is working on a definitive biography of the man. In a recent email exchange with Philip, he told me he’s aiming to have it written by the end of this year, if all goes well. Maybe we can hope to see it published in 2009? Hopefully with lots of illustrations, and maybe even a Barnaby strip or two? Or twenty? The bio is actually a double bio, as Johnson’s wife, Ruth Krauss, was a powerhouse storyteller in her own right, having published numerous children’s books, including The Growing Story (1947). It’s a beautiful story about a little boy who can’t wait to grow bigger. It's set amidst the changing seasons on a farm. I chose this particular story to read to my own child, while he was still in his Mommy's tummy.

Start them early, I say.

I sincerely hope you can get your hands on some Barnaby comics. With luck, you’ll come across them on a crisp autumn afternoon, and you can sit under a nice tree amidst the fallen leaves, and enjoy. Say hi to Gus The Ghost for me, if you see him.

But say it quietly. Remember, he frightens easily.

Barnaby definitely has a cult following, though I have to say that I always found the art a tad on the sterile side.

Certainly a comics specialty publisher like Fantagraphics, Drawn & Quarterly or IDW would be a good candidate for reprinting the work, though I have no idea what the status of the rights are

Gene Deitch made a version of "Harold and the Purple Crayon" in 1966. Still available on a Rembrant Films collection. Then there are the HBO series, narrated on air by a woman, but, evidently, on the DVD, by a man.

Barnaby was filled with clean rectangular shapes which went with the clean type face that Johnson used. Compare with "Little Nemo" and Winsor McKay's lettering, so crammed into the balloon that it sometimes goes up the side.
There were several comic strips, back then, that, like Barnaby, were primarily flat, thin line with no shading and, usually, one area of ink. "Nancy" and "Henry" and come to mind. Somebody once said that it was easier to read "Nancy", than not to read it. "Henry" had no words.
In all of these, the static composition of the characters' poses inside the frame are more important than expressing action and movement.
By the way, if you check out some of the dirigible dreams in "Nemo" you'll see architecture and shot point-of-views that presage many of the Sci-Fi movies of the '80s and beyond. And you'll recognize the influence that Stanford White's buildings had on MacKay.

Thanks for the Barnaby post, Chris! And thanks for linking to the Crockett Johnson Homepage, too!

So, by way of saying "thanks" properly, I thought I'd share some obscure "Barnaby" trivia with your readers... on the assumption that this might be interesting. I realize, of course, that it in fact may be quite dull. Well, here goes.

This is a little-known fact about Barnaby: Crockett Johnson was involved with the strip even after the end of 1945. True, the name "Crockett Johnson" disappears from Barnaby beginning with the strip of 31 Dec. 1945, and stays off into September 1947 (when it returns as "CJ"). During this 20-month period, Johnson sat in on story conferences, but Ted Ferro wrote the script and Jack Morley did the art. As of September 1947, Johnson began writing the script again, with Morley continuing to do the art -- the credit read "Jack Morley and CJ" after that point. From September 1947 on, Johnson's involvement extended beyond simply writing the script. To guide Morley's art, Johnson sketched a fairly specific layout for each panel. So, though he gave himself second billing, Crockett Johnson was still actively involved.

The strip's typeface is italic Futura medium. Futura was designed by German typographer Paul Renner in the 1920s. As far as I know, Barnaby is the very first comic strip with its words always set in type. George Herriman's The Dingbat Family of July 26, 1910 (notable for the marking the debut of Krazy Kat and Ignatz Mouse) uses type, but Herriman abandoned the experiment, preferring hand-lettering (thanks to Chris Ware for pointing this out to me). Does anyone know of other comic strips prior to Barnaby (which made its debut in April 1942) that always set its dialogue in type? If so, please let me know! Thanks!

Another tidbit: Crockett Johnson's attention to detail makes most perfectionists look quite ordinary. Howard Sparber, who did inking on Barnaby for part of 1944, told me that the type "wasn’t just sort of dashed in. Dave would be writing the text as if he was counting characters in his head, because he knew he had to do five lines to fit into a balloon that would be over Mr. O’Malley’s head or something like that." The "Dave" in that quotation is Crockett Johnson: Dave was his real name, and that's what just about everyone called him.

Right. I hope that was sufficiently obscure without being excessively dull.

Thanks, Phillip, for that. I wonder why Johnson stepped to the background? Maybe it ended up being more rewarding for him to play a more distanced but nonetheless creatively vital role? So he could devote himself to other pursuits?

As for the typesetting, I had no idea Barnaby was so unique for its use. I assumed it was just unique to my little Southern Ontario eyeballs...

I think that "So he could devote himself to other pursuits" is the answer. That's also one of the reasons he ended the strip in 1952.